History of ARSP in the United States 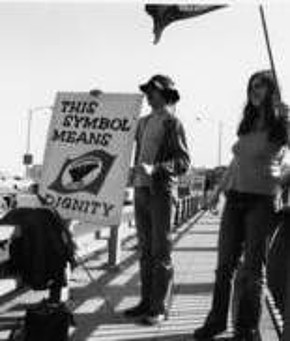 After World War II, young Americans of the traditional peace churches – the Quakers, Mennonites and Brethren – came as volunteers to a destroyed Europe to work in refugee camps and settlements for "displaced persons." In the 1960s, American volunteers worked with German youth in local church congregations in West Germany.

After a decade of cooperation between American and German peace organizations in Europe, the peace churches and the United Church of Christ asked ARSP to send German volunteers to the United States to ensure that this peace service would not be a "one-way-street."

The United States was struggling to overcome racism. In 1968, Dr. Martin Luther King, Jr. was assassinated. Riots swept through the ghettos of American cities. The Vietnam War was at its peak. American church groups thought they could use help from young, highly motivated volunteers. They believed Americans and Germans could support and learn from each other since both nations faced similar problems of racism and militarism.

ARSP accepted the church groups' invitation to do volunteer work in the United States for several reasons:

At the invitation of the U.S. peace churches and the United Church of Christ, volunteers worked at camps for children from poor neighborhoods, community centers in urban ghettos, halfway houses, camps of migrant workers, and on Indian reservations.

In the 1970s, many ARSP volunteers worked in community organizing, especially helping migrant workers and dealing with housing problems.

Today our volunteers are active in ten cities in the U.S., specializing in one of four different fields: