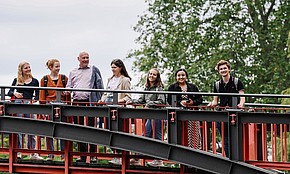 I am honored that I was invited to participate in the annual youth meeting of the German Bundestag. For four days, together with 30 other young people, I explored the complex of topics "National Socialist crimes and occupation rule in the Second World War" in and around Berlin. The encounter had a great impact on me, as we dealt with a group of victims of the National Socialists that is not yet so well known: the population of the Soviet Union.

First, I would like to introduce myself briefly. My name is Franka Sunder, I am 21 years old and in 2019/20 I completed my volunteer service with ASF at the American Jewish Committee in the American capital Washington DC. I am currently in my second semester studying Liberal Arts and Sciences in Freiburg, Germany, an English language program.

Due to the current infection situation, much of our work has taken place in small groups. Seven of us worked on the topic of "starvation and exploitation" especially in relation to the Leningrad Blockade. Over two days, we as a group deconstructed the myth of the "clean Wehrmacht," elaborated on the uniqueness of the war of extermination in the Soviet Union, and dealt with the situation of Soviet prisoners of war. As young people, we see it as our duty to include this group of victims in the German remembrance landscape. With the group, we walked through Berlin - past the T4 Memorial, the German Resistance Memorial, and the Soviet Memorial - and considered, "What could a suitable memorial for Leningrad, with approximately 1 million dead, look like?"

Of course, we did not find an answer in this short time, but we had the opportunity to present our ideas to the President of the German Bundestag, Dr. Wolfgang Schäuble, during a panel discussion. We were all very much looking forward to the panel discussion and prepared our questions - including, of course, critical questions about the German culture of remembrance. Unfortunately, the panel discussion was not so much characterized by critical exchange, but rather by long speeches by Dr. Schäuble, and our ideas of living memory culture also seem to diverge. Nevertheless, I am grateful for the exchange and maybe some of our ideas were heard.

Finally, we visited a cemetery in East Berlin, where a memorial for at least 1360 people murdered by the Nazis is currently being built. We had the opportunity to talk to the two architects and the mayor of the district and to actively experience the construction and conception of a memorial. I also found the visit to the German-Russian Museum Berlin-Karlshorst interesting. In order to bring the stories of the victims closer to the guests, the stories of various Red Army soldiers are told on panels in the outdoor area.

After the youth meeting, I am highly motivated to continue dealing with remembrance culture in my free time and I am especially looking forward to activities with the ASF Freiburg Regional group.

video of the event with interviews