Looking back at my year at L'Arche à Bruxelles "La Branche" 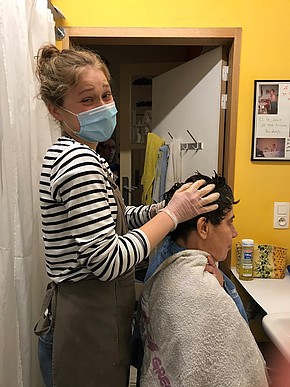 I was in the foyer "La Branche", where we have always affectionately called our residents "Les Branchés." In our work we accompany and support the residents in their everyday lives. On the one hand, this includes waking them up in the morning, preparing breakfast, and on the other hand, making sure that everyone goes to their day care center on time in the morning. There they work in workshops such as painting, sewing, mosaics, cooking, baking, music, gardening, and in many other areas.

In the afternoon, between four and five, the residents return to the foyer, where we receive them again and have coffee. Everyone has the opportunity to talk about their day, what they have experienced, maybe share news from their families or their plans for the afternoon.

In the evening, it is the turn of one of the volunteers to cook with one of the residents for everyone in the foyer, always listening to lots of loud music and dancing! After we all have dinner and wash dishes, which is usually sweetened by residents and volunteers singing, those who still feel like it can linger in the lounge for a cup of tea. This allows everyone to find a somewhat quieter end to the day before our residents head to their rooms at nine. What kind of movies the residents watch there until the wee hours of the morning, however, remains private.

Some who might read this text think to themselves that they could never live and work 24 hours a day in their project. Some might be a little afraid how they should/could interact with people who have an intellectual disability. They might think that they would not be able to build a strong relationship or even friendship with them. That the residents miss out on so much in life.

I don't even remember how I imagined life in the foyer and the habits of the residents, but now after 12 months I can say that the residents in our foyer are totally integrated into life, live their lives and have extremely much fun doing so. Just last week, at an Arche seminar with the volunteers, we talked about what makes life in the Foyer special. One of the first things they mentioned was that not a day goes by without at least one good laugh!

Besides, there is always something going on in La Branche! Music is playing all the time and à fond! The branchés are always asking for new songs and usually I'm the one who doesn't know the singers or hasn't heard the latest albums from the most famous singers. It's the same with actors and movies, because Laetitia for example, can tell you every movie if you tell her actors like Hugh Grant or Julia Roberts.

And of course, not to forget our fêtes, which we celebrate here on every occasion. The second inoculationhas to be celebrated, of course, the birthdays of the branchés and the équipe, the birthday of La Branche, but also at least one Christmas and New Year's Eve party.

Johanna, Meierhenrich, 19 years old, is living today in Freiburg and studies to become a pharmacist.