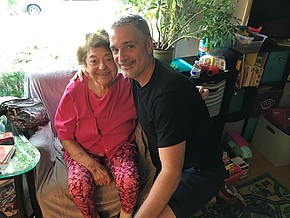 I want to do a thread about a friend of mine who just passed away. Her name was Magda Brown, she was 93, a native of Hungary, and she was a survivor of Auschwitz and the Buchenwald slave labor system. You can read and hear her story here: magdabrown.com
I put that first, because after a couple of days of reflection, I think that single most important think I can do is honor her memory is to make sure that her story continues to get told. Go and hear her story – send others to see it. Donate to the Illinois Holocaust Museum & Education Center (@IHMEC) and to Action Reconciliation Service for Peace (@ARSPUSA) to support the continuation of her work.
Telling that story became the central act of her later years – and she reached thousands of people around the country and in Europe – and many sitting in her kitchen with her. I know this because I was lucky enough to sit there twice a year, as she would bring out her scheduling books, tell me about her upcoming plans, and share the stories of the people she spoke with and whose lives she touched.
I met Magda through my work in 2013, pushed by a former ARSP volunteer who would have haunted me had I not followed his advice and reached out to her.  Annoyed and juggling other priorities, I delayed but finally went to pay my respects. Oh man, I had no idea.
In one corner of her kitchen – the place where all visits really took place – where the pictures of a decade’s worth of young Germans who had been volunteers with ILHMEC and who Magda had taken under her wing – feeding them, giving them a place to escape the museum across the street, and sometimes having them live with her.
I have had the enormous privilege to meet many Holocaust survivors – and they are as different from each other as people in general are. Each one carries the unforgivable trauma of their experience with them in their own way. For Magda, her way out was through a path of love. This is something that I can’t honestly say I could have done myself, in her circumstances. She embraced the grandchildren of the people who destroyed her first life and cared for them. She made them a part of her life but also became a part of theirs – ultimately embracing their families overseas.
A woman who deserved comfort offered it instead everywhere she went. She offered it to me as well – there was no visit with Magda without food, everything laid out on the table in anticipation of my arrival. We talked, laughed and cried – well, I cried. On the first anniversary of my mother’s death I sat in her kitchen in tears and Magda pushed a nice bowl of mazah ball soup in my direction. A can of Coke always stood at the ready.  Magda made sure I met her family – wonderful people who also opened hearts and homes to me.
As a speaker, Magda was unstoppable. She traveled the country with her message of “Never Forget” and the centrality of Love to this life. There she comforted others as well – the grandchild of an SS officer that a young Catholic boy feared was in hell, a young gay man struggling – she showed openness and kindness even in the face of enormous suffering.
But she was also fierce: On one speaking trip, she fell and fractured a vertebrae. This didn’t stop her – she Skyped to her audience from her hospital bed. When the Tree of Life synagogue in Pittsburgh was attacked in 2018, I called my partners there. One said: "Oh, we have a survivor who was coming to speak tomorrow about the Holocaust - from Chicago. I called her at the airport to say ‘maybe you should cancel.’ She said – ‘no, now more than ever.’" I laughed, I said – “ah, so you have Magda Brown coming to talk.” It was so her. She spoke to a full house the day after those people were butchered and again offered memory, hope and love.
A much smaller story: In 2017 when I married my husband, I received a gift and a card from Magda. The card – a wedding card with two men on it. Everyone I know told me they couldn't find a card with two men. Magda Brown did. This was also so very her.
In wrapping up I want to say a couple of things. To the ARSP Volunteers out there: Many of you knew Magda and were touched by her. There is no question that you and your presence in Chicago also filled her with joy and shaped who she was in her later years. You are a part of her story and thank you for everything you did. You know her love for you was larger than life.
And finally, this: Magda Brown was – and is - a light to the world. Few of us - certainly not I - can hope to shine with the brightness that she did.  In Judaism, there is a belief that the world is held together by the presence among us of a few Righteous Ones. Magda Brown is one of those. There is a song in German that is in my playlist right now, that speaks to it. Here is one verse:
Doch ja, ich weiß jetzt, es gibt Menschen, die diese Welt durchaus rechtfertigen
Die durch ihr bloßes Dasein andern Menschen leben helfen
Die lieben und lieben und lieben und lieben und lieben und lieben
Als wär' es das Leichteste der Welt
Magda Brown found a path to love, and love, and love and love that I can never forget. She called us all to moral life that centered love. I will miss her, I will miss her kitchen, her wisdom, her humor, her fierce embrace of life.
May her memory be a blessing, and may she live on in all of us who knew her.