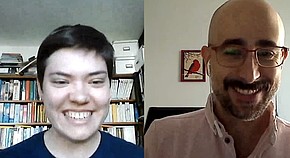 Throughout Trump’s presidency in the US, reputable newspapers all over the world have been publishing articles reporting a difficult situation for LGBTQ+ rights in the US. Headlines announced “Trump has a devastating record on LGBTQ rights. Don’t deny the truth.” (Washington Post, Michelangelo Signorile, August 20, 2019), “Trump trims back LGBTQ rights. Betrayal of all Americans” (Der Spiegel original “Verrat an allen Amerikanern”, Marc Pitzke, June 28, 2019) and “Trump has declared war on LGBTQ rights. Here’s everything he’s done so far.” (LGBTQ nation, John Gallagher, July 29, 2018).

As a current volunteer with ARSP, I did my peace service with the Jewish Family Service in Cincinnati, OH. My main task was to support the Jewish organization in the Holocaust department.The work was very multifaceted as I visited the elderly seniors at their homes and offered companionship, organized groups and helped in the office. My six months passed very quickly and just when I had settled in Covid-19 struck. Like all of my fellow volunteers I had to leave the USA much earlier than expected due to the Corona virus outbreak. Nevertheless, I still follow with great interest what happens in the US.

To find out more about the current situation concerning the rights of the LGBTQ+ community, I met via Skype with Luis Abolafia Anguita from the Victory Institute in Washington DC. We talked about his team’s support of the LGBTQ+ community in political participation not only in the US, how queer people’s rights get dismantled easily and why the November elections will play a key role for the queer community’s legal protection.

Mr. Abolafia Anguita is the director of international programs at the Victory Institute in Washington DC. He has worked on LGBTQ+ issues for twelve years. Originally from Spain, he got involved with the Victory Institute in 2012 through a one-year-long scholarship and started working there afterwards as they asked him to come on board as a staff member.

Rücker: Can you briefly introduce the Victory Institute and your work there please?

Abolafia Anguita: The Victory Institute’s mission is to achieve equality through the increase of political participation of LGBTQ people. We do exactly the same in the international office. We partner with local LGBTQ organizations in the countries where we are working.

We work in four main areas. We train people to participate and make a difference in democracy. We also work with political parties to try to open the door for political participation. There are many people that are ready to run but the institutions are not ready. Then we have an achieved match. We are also doing research to basically understand how queer people participate and engage in politics and what they expect from democracy. All the information will help us and the political parties. And lastly, we also work towards more visibility to inspire people with our mission. We know that it is important to reach the population and make sure we do not talk to the same people over and over again.

In the international programs department we have a team of three people and currently do active programs in Central America, the Dominican Republic, Colombia, Peru and South Africa. Right now we are running a virtual leadership academy in the Dominican Republic which has several modules throughout the year. It was supposed to be done in person but now we are doing a virtual one (due to Covid-19). The same applies to what we are doing in Peru. We are working together with parties and are helping create a network for LGBTQ people. In South Africa, we are working to train political parties and the electoral commission in diversity and inclusion.

Rücker: How do these active programs and trainings look like? Can you be more specific please?

Abolafia Anguita: It depends on the country, it depends on the need. In places in that the working environment consists of a huge queer population that is ready to engage in politics as in Colombia we do a “candidate and campaign” workshop which is a three day long intense workshop. Our team teaches how to run a successful campaign with the aim to provide for them the right tools to do so. In other countries like Guatemala, Honduras and the Dominican Republic we do a “leadership academy”. There the queer population is not much involved in politics yet so we want to expand the leadership base of LGBTQ people and plant the seed of political participation.

Rücker: I can see your work is successful. I read in one of your newsletters that LGBTQ+ people trained by the Institute frequently get elected in offices throughout the US, for example in 2017 into the New York City Council.

Abolafia Anguita: Yes, of course we cannot take credit for all queer people getting involved in politics anywhere in the US but it is true that we are contributing to the chance. We have been training people in the US since 1993. People that have taken our training include for example Senator Tammy Baldwin. We have been supporting her career since she was a City Counselor years ago and the numbers keep growing. We published our annual report some weeks ago and we had our 850th elected official. We are also conducting a huge search for queer people wanting to run after Trump’s election. I think everyone realized the importance of making sure that our voices are heard. That is what we do. Expanding leadership of LGBTQ people, we have queer voices all over the places where decisions are being taken.

Rücker: When we look at the political situation in the US, there has been an emancipation movement which started among others with the Stonewall riots in 1969. Is there legal equality for LGBTQ people in the USA today? How do you evaluate the current situation?

Abolafia Anguita: The US is a very complicated legal system. I do not think there is legal equality in any of the states right now – certainly not at the federal level. Very few states have full protections for LGBTQ people, especially for trans folks. It is a working process. There are still states in the US where discrimination in housing, in work is legal. There are gains but change needs to happen. Lately, there was a Supreme Court decision that makes sure that LGBTQ people get included into the protection against sexism. But we still have to trickle it down to the state level. We still need a full comprehensive bill that would prevent all LGBTQ people from discrimination that has to be passed by congress. There have been several attempts by the LGBTQ caucus and the allies in Congress to pass the Equality Act that has created a conflict with Republican law makers. So it is super important that visible legislation is passed. That is why we need to make sure that more queer people get elected at the state level so that they are able to make a change which will then trickle down to the federal level.

Rücker: So discrimination against the queer population is still legal. How does US-president Trump react to this fragile situation?

Abolafia Anguita: Because of the inability of Congress to pass legislation protecting LGBTQ people most of the things that have been achieved around equality for LGBTQ people in the US have been through the Supreme Court or through the executive office, in other words presidential orders. Trump has been dismantling all the previous’ administration gains for equality, including transgender people. Because of the polarization of Congress, Trump could dismantle the previous presidential orders. Targeting LGBTQ people is also targeting key legislation that has the Affordable Care Act. It is affecting LGBTQ people who can be discriminated against throughout their lives. This applies when we talk about housing, job access, and healthcare.

Rücker: To help estimate the legal situation: How is it compared to Europe and other countries?

Abolafia Anguita: I think the US is still lagging behind many European countries when it comes to protections, hate speech, housing and healthcare. One principal component in this regard is the complicated US constitution. It will be very difficult to limit hate speech in the US because of how the constitution is built and has been interpreted. But the hate speech is not only against LGBTQ people, it is against Black people, Native Americans, women, Jews. I think the US can learn from other countries, not necessarily in Europe but countries in Latin America, like Argentina that are doing better when it comes to protecting minorities.

Rücker: You mentioned that limiting hate speech in the US will be very difficult. But when we look at discrimination in housing and healthcare, do you think it will be possible to make changes in the near future?

Abolafia Anguita: Yes, I think so – November elections will play a key role. Our sister organization, the Victory Fund, is endorsing a lot of queer people that will be able to make a difference at state level. We also have a lot of people running for Congress right now, many of whom have taken our trainings. If there was a progressive majority in both Houses, the LGBTQ community could introduce the Equality Act again. This act will hopefully be passed because that would mean that discrimination against LGBTQ people in all the spheres like housing and healthcare would be banned forever.

Rücker: Do you have advice for young people? How can young people who want to participate in society – especially from underrepresented minorities – be heard and engage in politics?

Abolafia Anguita: It is important to protest. Being in the streets, holding governments, institutions, politicians accountable is really important. Being in the streets is not enough either. It has to be combined with running and being present and making sure that you can be elected. You need the support from the communities. If you really want to make a long-lasting change, you need to combine both.

Rücker: Luis, thank you very much for the interview!