The impact of German History: Young Jews and Germans in Dialogue 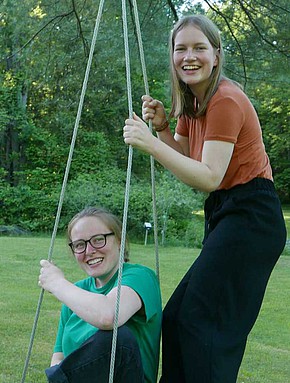 In March, Lea and I were invited to be part of a panel discussion at Brandeis University. Elan Kawesh and Jillian Fish, both Brandeis students, joined us to talk about the impact of German history and to create a dialogue between young Jews and Germans. The discussion focused on Holocaust education and how the way people learn about their history impacts their life. In the first part of the discussion moderator Julia Sirota, a Brandeis Senior, asked questions about personal connections to the Holocaust, how and if the Holocaust is part of middle and high school education as well as the family life. Having two American Jews and two Germans talk about Holocaust education showed that there is a huge difference in how and if young people learn about it. In Germany Holocaust education is a big part of the high school education, whereas in the US, based on Elan’s experience, it is not. Elan went to a public high school in Brookline, MA and shared that he had barely any Holocaust education in High School and that he had to educate himself. Jillian on the other hand, grew up in an orthodox family and went to a Jewish day school, where the Holocaust is talked about in a lot of classes. Later, we talked about what it feels like to learn about something that you have a personal connection to. In both cases, we agreed that it gets emotional weather you are a Jew and learn about the murder of 6 Million of your relatives, or whether you are a young German, trying to understand how his or her ancestors could have done something like that. After 30 minutes, the discussion was opened up to the audience and the 30 people who joined us that evening got to ask questions of their own. People were interested in how we learn about the Holocaust and if our generation ever gets annoyed with talking about it all the time. They wanted to know if young Germans talk to survivors and if we are connected to the Jewish community in Germany. For me and Lea it was very interesting and educating to hear how young Jews in America learn about that part of history and to realize that not everyone gets as much Holocaust education as we do. We all agreed that there is a lot that needs to be improved when teaching about the Holocaust -not only in the US but also in Germany.

At the end people wanted to know how we think the ideal Holocaust curriculum would look. We all agreed, talking to survivors, visiting holocaust memorial sites and teaching not only about the Holocaust but also about the structure and the background of Nazi-Germany is important. Even though there might be a tendency among young people to not want to learn about the Holocaust that much anymore, we all agreed that as long as genocides and dictatorships are still happening all over the world, there will never be enough Holocaust education.