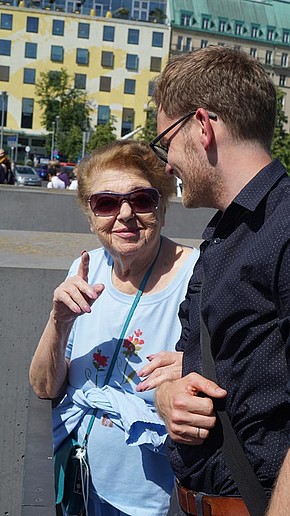 With this message, Magda ended her countless eyewitness talks, in which she told her audience how, as a 17-year-old girl, she was deported from her home town of Miskolc in Hungary to Auschwitz and from there to an ammunition factory in Stadtallendorf, a subcamp of Buchenwald in Hessen before she was liberated in March 1945 by the US Army on a death march. No Shoah eyewitness interview went without mentioning Aktion Sühnezeichen Friedensdienste (ASF) and her “German boyfriends” with grandmotherly pride, by which she meant us (former) volunteers.

She not only traveled all over the United States, where she lived after her immigration in 1946, but also to New Zealand and repeatedly to Germany in order to share her survival story as an appeal and warning to younger generations. No distance was too long, no obstacle too great to dissuade her from her mission. When she broke a vertebra on one of her trips, she was interviewed as an eyewitness via Skype from the hospital bed. In 2018, she traveled despite her poor health to the 60th anniversary of ASF. In the same year, when friends tried to dissuade her from traveling to and speaking at the Tree of Life Synagogue in Pittsburgh one day after the antisemitic terrorist attack, her answer was: “Now the world needs to hear the message even more. Let’s go”

At the many reunions - long after the end of my volunteer service - I always said goodbye to Magda knowing that, given her old age, it could be our last hug. Since she defied all health restrictions and always responded to appeals to rest with an energetic “I don't have time to be sick”, we always saw each other again, as recently as last year, when Magda undertook the trip to Germany to take part in the commemorative event on the anniversary of the liberation of Buchenwald. This year, she wanted to travel again. Her plane tickets were already booked as we had planned to meet in April in Germany. When her trip was canceled due to the Corona crisis, she said to me on the phone: “We will just see each other next year.” Since July 7, 2020 it has  become clear that there would be no next year. Magda Brown passed away surrounded by her loving family at the age of 93.

While the loss and grief are difficult to put into words, I feel humility and gratitude for the many moments that I was allowed to share with Magda: for the countless conversations at her kitchen table, where all of us ARSP volunteers at the Illinois Holocaust Museum and Education Center (IHMEC) have been pampered at one point with chicken soup; for the wisdom, the warmth and the trust with which I was welcomed. After everything that Germans have done to her and her family, Magda welcomed us volunteers with open arms. In so many ways she will always be a role model for me, and her legacy will remain our obligation. Rest in peace, dear Magda.

Gregor Darmer was a volunteer at the ILHMEC in Skokie in 2006/07. He studied Communication and Political Science as well as Politics and German post-war History in Erfurt, Seoul and Berlin. He is currently Director of the Mercator Centre Berlin after having worked for the United Nations and the German Federal Foreign Office.