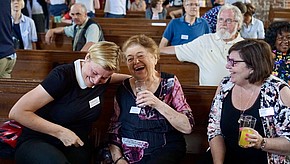 Magda (Perlstein) Brown  (June 11, 1927 - July 7, 2020)
If you have never heard of Magda also known as Grandma Magda, it is not difficult to find her story online. Simply search her name, Magda Brown and you could spend an entire afternoon reading about her life. If you venture further on YouTube , you can hear Magda describe her life in 18 Chapters from her childhood during WWII, her life during the Holocaust, entering the United States, living in Skokie, IL and why she started to speak up later in life. I would recommend for anyone to listen to Magda’s story.

Magda, who married her husband Robert Brown, a native to Chicago in 1949 was ready to start a new life in Skokie, IL. The village is a suburb 15 miles north of Chicago, as Magda put it, it was less expensive. After WWII, a large Jewish population settled in that area and by the 1960, 58 % of the population was Jewish and many were like Magda, Holocaust Survivors. In her video, Magda recalls that when she arrived in the United States and tried to tell her horrific story no one really wanted to hear it. People would start equating her suffering with what they had to go through, they would point to the depression years, that they lost their sons and husbands in the war and that it was very hard for them too. Like many other survivors Magda “shut up.”

In 1977, the National Socialist Party of America (NSPA) planned a march through Skokie with swastika emblems and uniforms. This event turned out to be a wake up call. The community got together for a demonstration but also a campaign to educate people about the Holocaust.

This is what the Illinois Holocaust Museum & Education Center (IHMEC) writes about that time:

"In November 1987, an outbreak of vandalism directed against Jewish stores and synagogues, prompted Erna I. Gans, Holocaust survivor and President of the Holocaust Memorial Foundation of Illinois, to issue a call for action to combat such violence with education in the form of a state mandate.
Gans and other survivors urged legislators to mandate the teaching of the Holocaust as state law. Eventually, mandating Holocaust education, now known as House Bill 3, passed in both the House and Senate. Illinois became the first state in the entire country to require the teaching of the Holocaust in all public elementary and high schools, effective January 1, 1990.
In 2005, the leadership of the new Illinois Holocaust Museum played a key role in the expansion of the existing Mandate to include the study of other modern genocides, underscoring a universal lesson of the Holocaust that national, ethnic, racial, or religious hatred can overtake any nation or society, leading to calamitous consequences."

Magda Brown was a speaker at the IHMEC and started to venture out speaking to many groups and everyone interested both in the United States and elsewhere. She told her story over and over, reiterating: “If you ever encounter a Holocaust denier you can tell them you met me.” Her granddaughter Amy Rainey remembers that her Grandma finished many presentations with the sentence “You have to have faith, fantasy, hope, drive and determination that tomorrow will be better.”

Magda Brown was a warm and loving woman who embraced our ARSP volunteers and kept in touch with many of them “creating life long lasting friendships.” We would like to express our gratitude to Magda’s family, her son Bruce, daughter Rochelle, her nine grandchildren, nine great grandchildren and three great great grandchildren for sharing their mother and grandmother with us at ARSP, our volunteers and all others who had the privilege to meet Magda Brown in person.

We have already learned that silence is not helpful, not speaking up is not helpful. If we want to be sure that there will be no repetition of violence, discrimination, and murder against Jews or any other group of people we need to remember Magda and all other Holocaust Survivors. We have to become part of the chorus of many. We can start by learning and remembering Magda’s story.

In Magda’s words: " Think before you hate, Protect your freedom, and Stand up to the deniers!"