"If we were to build a collective memory of the last 50 years ARSP, what would that memory look like?" 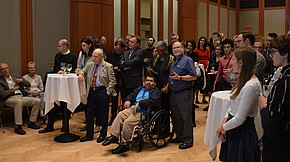 Danny M. Cohen of Unsilence launched the 50th Anniversary Gathering asking the over one hundred participants to speak together and consider what these 50 years have meant for them as individuals, for the organization, and for both Germany and the United States.

In all, one hundred forty current and former volunteers, project partners, Germany Close Up alumni and friends of ARSP came to New York City the first weekend of October to celebrate 50 years of service in the United States and to look ahead to the challenges we face today.

The event spanned three days. Each day added pixels to an emerging picture: young Germans who served at the height of the civil rights, anti-racism and anti-war movements in the 1960s and 1970s, a growing engagement with the Jewish American communities and survivors of the Holocaust in the 1990s and 2000s, and a commitment to speak to democratic values today, where they are under attack on both sides of the Atlantic.

The opening reception, hosted by the German Consulate New York, featured comments from Thomas Oppermann, current vice-president of the Bundestag. Oppermann was one of many ARSP volunteers in the 1970s who worked to secure rights for migrant farm workers. He spoke to how this experience made him understand the importance of political action–lessons he brought back to Germany.

Rachel Falkove, chair of the American Friends of ARSP spoke from her experience of the power of encounter in changing hearts and minds. The child of progressive Zionists, she was taught from an early age to turn her back on all things German. Her encounter with ARSP volunteers helped to heal wounds and opened her to reaching across the divide created by the Holocaust, bringing her to Germany for the first time in 2008.

On Saturday, the transatlantic relationship, the rise of right-wing racism and the threat to democracy were central topics. One keynote speaker, Karin Johnston, a Franklin Fellow at the US Department of State movingly of ARSP as a “Wegweiser … As Lothar Kreyssig, the founder of ASF showed us: if we have the courage to acknowledge our responsibility and then act upon it—to help ourselves and others find ways of overcoming hatred, animosity, and indifference.”

Holocaust survivor Sami Steigmann spoke and we were honored by project partner Selfhelp Community Services allowing us a sneak preview of a new documentary: Witness Theater.  Survivors in metropolitan New York worked with high school students to create short theater pieces depicting the survivors’ stories.  At turns humorous and tragic, the film honors its subjects and addresses the question of how do we continue to remember what happened and learn from it?

An anniversary is not only a reflection – it is a celebration.  And throughout the weekend, we broke bread together, danced, and in the German Lutheran Church of St. Paul’s gave thanks that we have been able to continue to serve here in the United States – that we find who welcome us and join with us.  There is no simple answer to Danny’s question – but there are many memories that taken together give us something to celebrate.  And as recent events remind us, there is much to do.