"Trying to finally put together a weave of my family history...

...became the initial intention for doing my volunteering at Neuengamme Concentration Camp Memorial"
by Solomiia Romanenko 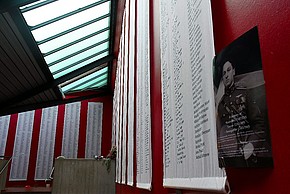 The most important thing to understand about the history of Ukraine in the Second World War is that as of September 1939, Ukraine was not politically homogeneous. After the Ukrainian War of Independence (1917–1921), Ukrainian people were politically dispersed, ranging from communists, nationalists to social democrats and Zionists. The result of this is that most families were »broken up« by the various political affiliations of their members.

My family was no exception. In 1939, a part of my family lived in Poland and Western and Central Ukraine. My great-grandfather, Mykhailo Yukhymovich Romanenko, who lived in the Vinnytsia region and was married to my great-grandmother, who was a Jew, began his military career in 1939 in the Battles of Khalkhin Gol, a local conflict between the USSR and militarized Japan. Then, after the Wehrmacht occupied Soviet Ukraine, my grandfather was drafted into the army and was captured around 1943 and sent to one of the forced labor camps. When Soviet troops began to liberate areas close to the camp, he managed to escape and rejoin the ranks of the Soviet army. As a result, he was one of the soldiers who entered Berlin in 1945 and helped to liberate Europe from the horrific Nazi crimes.

On the other hand, the story of my family that lived in the Western Ukraine is very different. Most of them joined the nationalist movement for Ukraine‘s independence and liberation from Soviet and later on German occupation. My grandfather’s cousin was sent to Siberia, where he died in the Gulag concentration camp sometime around 1944.  His father, accused of treason by the Stalinist totalitarian regime, was forced to flee to occupied Europe and then to Canada. The NKVD (interior ministry of the Soviet Union) searched for him until his death in the 1980s, and my family was under surveillance and was being constantly interrogated by the communist security machine.

A very similar situation happened to part of my family, who lived in Poland, in Sanok County. In 1944, my pregnant great-grand-mother and great-grandfather were forcibly relocated to the territory of the Ukrainian SSR in what is now the Volyn region. Later, my great-grandfather, who was a member of the Ukrainian Insurgent Army at the time, was forced to flee to Europe, where he was killed by the NKVD.

Unfortunately, my family was not very careful to save their history. They were scared of ethnic persecution by the Soviet authorities and accusations of treason. Therefore, a lot has been lost and a lot I have to collect my-self from the small bits of memories left by my parents, their siblings and my grandparents. Trying to finally put together a weave of my family history became the initial intention for doing my volunteering at Neuengamme Concentration Camp Memorial. Now I can finally find out what concentration camp my great-grandfather was in, where my other great-grandfather was killed, and understand more about why everything happened the way it did and how to keep the horrors of WWII and totalitarian regimes from happening again.

Solomiia Romanenko who has studied Political Sciences and volunteered for several nonprofits. In March 2021, she started her ASF-volunteer year at the memorial site in Neuengamme, Germany.