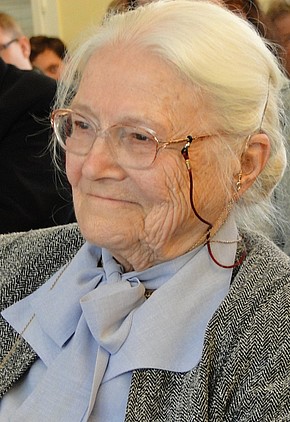 On June 25, 2021, Verena von Hammerstein died in Berlin at the age of 99. Sadly, we bid farewell to an important companion of Aktion Sühnezeichen Friedensdienste. The Swiss theologian was committed in many ways to Christian-Jewish dialogue, to a theological understanding of work against racist discrimination, to global justice and international understanding. The confrontation with National Socialist history accompanied her commitment for decades.

From 1954 to 1957, Verena von Hammerstein lived in the United States, where she came into contact with deeply rooted racism and social injustices. There, she was exposed to community outreach and was deeply shaped by new debates and perspectives. These insights are found in the book she edited with her husband, Responsible Community in America.

In addition to her association with Aktion Sühnezeichen Friedensdienste, Verena von Hammerstein became involved with Aktionsgemeinschaft Solidarische Welt, an organization founded at almost the same time that focused on global justice issues.

Verena von Hammerstein was an astute theologian and an alert political observer. Her international experience, her interreligious encounters, her intellect, erudition, and her political, ecclesiastical and social impulses made her an exciting conversational partner. She radiated thoughts and associations, which she combined with great cordiality and curiosity. Suddenly she would dig out some Hebrew knowledge, search for a suitable text, bring new contacts into play. The conversations were enriching until the end.

We remember with great pleasure Verena von Hammerstein's faithful and very active participation in memorial services, membership meetings, receptions and Christmas celebrations. She was always surrounded by people who enjoyed talking with her. Once she asked us to accompany her to a public memorial service. A board member picked her up at her home. He was himself a theologian and had animated discussions with her throughout the car ride, but got lost along the way. Verena von Hammerstein commented mischievously, "Then I hope you are better at preaching than driving!"

In 2019, in an interview for our magazine “Zeichen” (sign) she recounted her experiences with volunteering: "I sat at the typewriter at home half the day, I wrote reports, did translations. That certainly saved an office worker." Later, she organized trips for volunteers, which she commented as "I had half a travel agency." When Verena von Hammerstein took stock of her life she concluded that she lived in a very different time and that she had experienced a lot in her life. As to gender expectations she remarked: "Today, after all, women have a very different demeanor. And that's a good thing."

Verena von Hammerstein supported and enriched us with her stories, her personality and her great solidarity. We lose a friend and mentor, we lose a courageous and attentive companion. Our deepest sympathy goes to her sons and extended family.

I am grateful that I was able to get to know Verena von Hammerstein.