On Saturday, January 20th, many ARSP volunteers including me decided to participate in the Women’s Marches all over the United States. The Women’s March is a protest march and the one year anniversary of Trumps inauguration. With over 200.000 protestors including men and women we marched through the streets of New York to protest for environmental justice and civil rights, ending violence, women rights as human rights and much more. The incredible self made signs with painted pictures, creative pro- women slogans and slogans about political issues were a very important part of the entire march. I, as a person that comes from a pretty small town in Germany, have never been part of such a big movement. The march made us feel excited and gave us the feeling of having a voice.

Respect my existence or expect Resistance!

That is exactly what we did on Jan 21. One year after the inauguration of Donald Trump, it is very obvious that he does not respect the existence of not only women, but so many other people. I felt the need to let out all of my anger and publicly take a stand against Racism, Sexism, Homophobia, Xenophobia and any kind of intolerance. As an ARSP volunteer, who is doing a year of voluntary service trying to encourage people to be tolerant and open, I can’t and won’t tolerate someone like Donald Trump. Therefore Lea and I went to the Women’s March in Cambridge near Boston. On our way to the march we already met a lot of women, who had prepared great signs and were ready to protest. About 10.000 people gathered to listen to some speakers, who do not support this administration and disagree with its intolerant and irrational worldview. It felt very empowering to protest alongside 10.000 other angry and unhappy people and it was very good to see that there actually are a lot of people in the United States, who are not going to watch such intolerance people lead a country. We are not going to stop! You tweet, we march!

After two hours of waiting where we chatted with interesting women and men about the topics equality, European politics and the current President of the United States, we could finally start walking. The people did not only protest for women’s rights but also showed their dislike of this current administration’s policies. During the walk we got to know fascinating people and rose up against discrimination and homophobia and for equality, love and the power of women. 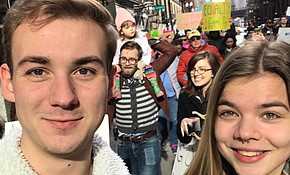 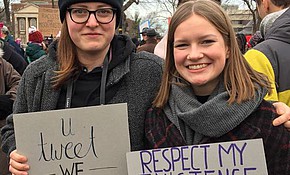