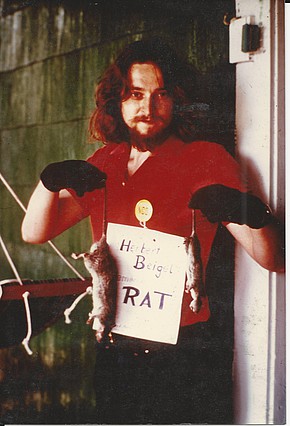 The picture with the rats was taken during a rent stike I had organized in my neighborhood. We had caught the rats in the respective house and then visited the owner in suburbia with them. We left the rats and some flyers to inform his neighbors. We later won the case in housing court. © Keil

As a conscientious objector to the German military, I came to the US as an ARSP volunteer in order to do my alternative civilian service (Zivildienst). Back then my name was Roland Keil. I changed it to my wife’s last name Zenk when we got married.

In 1975, ARSP first placed me into a day care centre in a low class neighborhood in Chicago as a volunteer: the Bowen Center, which was located at 2761 North Seminary, on the corner of Lincoln and Diversey. We were taking care of neglected low-income kids, mostly black and Puerto Rican, some poor whites from Kentucky, who were called “hillbillies” back then.

In the beginning of 1976, the ARSP headquarters asked me to join them and work there, which I did. The US office of Action Reconciliation was then based in Washington DC in a place called the “Interaction Center”. The Interaction Center was located on 4920 Piney Branch Rd NW, just off 16th Avenue; on the corner of Farragut Street NW. (It now contains the Bert Corona Leadership Institute). The Interaction Center was quite an interesting place to work. You can find a great photo of it in Google Maps Street View. There were two big houses and a huge garden, where four different mostly Christian based progressive organizations worked and lived together. It was big enough to also hold conferences and workshops for 30-40 people there.

When I got there, Greg Brown was leading the office, together with Dieter Reithmeier, who wanted to go back home to Germany, because his ARSP time was up. He was from Prien on Lake Chiemsee, in Bavaria. And we needed a third person in the office, so we called up Franz Kohout, who was at that time an ARSP volunteer in Rhode Island, working as a community organizer. Franz joined us in the ARSP Washington office. He was from Landshut, Bavaria, where I also came from, so for over a year we had a Bavarian stronghold in the ARSP office.

Here are some of the other organizations who were based in the Interaction Center and whom we were very closely working together with:

First there was LAOS. LAOS came out of the anti-war movement against the war in Vietnam and the civil rights movement. They were part of Clergy and Laity Concerned (CALC), I believe, and they were dedicated to developing a strong laity in the churches, supporting social and civil rights issues and projects in the US.

One of the most fascinating organizations in the Interaction Center was EPICA, the Ecumenical Program for Inter-American Communication and Action. It still exists as the Ecumenical Program in Central America and the Caribbean now (EPICA). Philip Wheaton was one of their prominent figures. He was a theologian and a great supporter of the Theology of Liberation. When I was there in 1976, EPICA published two interesting books on US colonies which you can still buy in Amazon: “Puerto Rico: A People Challenging Colonialism Paperback” (10 US$), and “Panama: Sovereignty for a Land Divided” (9,50 US$). Especially the book on Puerto Rico still is recommended reading today!

What was our job in the ARSP office?

First, we had to find projects for ARSP volunteers, which meant keeping contact with partner organizations and projects. Then we had to get visa for ARSP newcomers, which we did together with our partner churches in the US. We did fundraising, published two newsletters (one in English for our US partners, and one in German for our volunteers and ARSP-alumni back home) and corresponded with ARSP volunteers who were about to come over, in order to best place them in projects that suited them. We organized regional conferences for our ARSP volunteers, and four times a year we had a preparation and orientation week for new ARSP volunteer arrivals.

In those days, we would place our volunteers into Community Organizations, the United Farmworkers UFW, and into social projects in poor income neighborhoods. One of our most distinguished partners in Washington DC was CCNV, the Community for Creative Non-Violence.  John Grisham has set them a monument in his novel “The Street Lawyer”, dedicated to CCNV and Mitch Snyder, who became one of its most famous leaders in the 1980s. I recommend it for reading! CCNV had homes for the homeless, a free medical clinic, a legal clinic, and a soup kitchen. They were based on 14th Street, not far from the White House, right smack where the black ghetto began in those days. We usually had at least two ARSP volunteers work there. 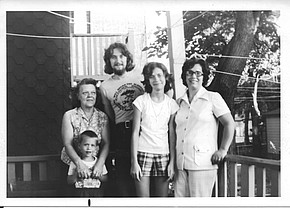 In this photo – dated May 1977 – you see the leadership ladies of my very active 1700 North Talman Block Club on the Near Northwest Side of Chicago: the Bialobrowskis. © Keil

One of the most important tasks in our ARSP office was the preparation & orientation week for new coming ARSP volunteers. We would pick them up at Kennedy Airport in our VW bus. On the first day, we set each one of them out on a survival training, somewhere in the middle of Washington DC, give him/her 5 bucks and a few tasks to do, like: “find the office of the American Friends Service Committee and ask them for their latest publications on social justice issues in US” etc. They all did find their way back home to the Interaction Center at the end of the day, even though not everyone’s English was particular good yet. During the orientation week, we would also invite speakers for discussion, and for one day we would set the volunteers to work in the CCNV soup kitchen. A real highlight was the weekend in Philadelphia. We had a partner church there, right in the middle of a poor African American neighborhood, not far from where the organization MOVE was located, which you may have heard about. Mumia Abu-Jamal was closely involved with them. On Saturday, we would send our ARSP volunteers to help poor black families, mostly eldery ladies, renovate their homes. On Sunday, it was a real treat to participate in the church service. For most of us who were used to dull church services back home in Germany, this was quite a change, to witness the liveliness of a service in a black neighborhood church. For me, it would always be a special privilege to be called up front and address the church community and explain why we were there.

Some ARSP volunteers became quite well known later in their lives. For instance, we placed Thomas Oppermann to work with the United Farm Workers (UFW) in Washington DC, in 1976. He is now the vice president of the SPD in the German Parliament.

Action Reconciliation Service for Peace has shaped my life. Ever since I got back home to Germany in September 1977, I have been politically active: in the student movement, the peace movement, the labor movement, the Nicaragua Solidarity movement. I work in the IT department of Deutsche Bank and have been a candidate for its workers council (Betriebsrat). I am currently active in my hometown Eschborn as a coordinator in the refugee welcome movement and for Die LINKE, which is something like a Bernie-Sander-like outfit.