Wolfgang Köberer
1968 in the USA

As far as I remember, I was with the second group of ASF volunteers in the US. In the first group that arrived in the fall of 1968 were two classmates of mine, Volker Hauswald and Frieder Sondermann. Volker had been in the US one or two years before as an exchange student with the American Field Service and he had worked with me in an ASF summer camp in 1965, clearing the grounds of the – then new, now restored – memorial at the Bergen-Belsen concentration camp. They both worked in California, but I do not remember where. Volker died at least 10 years ago, he had been a teacher; Frieder went on to be a lecturer in Japan married there and has 3 children. He came to Germany in April for the 50th anniversary of our graduation. 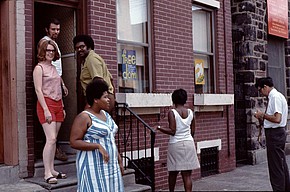 Staff of the Community Center in Philadelphia

I arrived in New York early in January 1969; we – 3 young men and 2 women (?) – were picked up by member of the staff of the training unit of the Church of the Brethren  in New Windsor, Md., where we spent the next 2 months in the former college among a group of American conscientious objectors. At the time – as you will recall – the Vietnam War was at its height, as was the opposition to it. So one of the outings (when we did not have classes on nonviolence and social work or ‘sensitivity training’ or sorting clothes) was to the demonstration in Washington, DC on the inauguration of Richard Nixon. I went there again a year later, when 100.000 people protested the invasion of Cambodia on the lawn in front of the White House.

I had asked for an assignment in a black ghetto but apparently, the people in charge did not deem me fit for that. So I went with some other volunteers to the National Institutes of Health in Bethesda, just outside of DC, to act as a guinea pig (Normal Volunteer) for about 4 months, as a normal volunteer I was involved in a study of the effects of Aspirin on the blood platelets and in a study about speech patterns in the Lab of Psychology.

That was a pleasant experience as we were a group of about 50 – 60 young people, some of them college students who were there for spring break. As we could use a small van (with my roommate Dave and I being responsible for the car) we could go downtown as often as we liked. I especially remember the Cherry Blossom Festival of 1969 when there were hundreds of thousands of visitors in town and the cherry trees around the Tidal Basin in full bloom.

Finally, my wish was fulfilled: I was assigned to a community center in North Philadelphia which was run in and by a Methodist church on 6th and Dauphin. The center was in the former Parish house right next to the church and the activities – mostly for children – were in the church. The pastor was white (he left the following year and was replaced by a black pastor) but the neighborhood was almost completely black. Most white people in this lower middle class neighborhood had left in the preceding decade and only older white people were still living there. The congregation had also changed: it was mostly black people but a few of the older members who had moved away were still coming on Sundays. One of my duties was to pick them up at their homes, and bring them back after church. 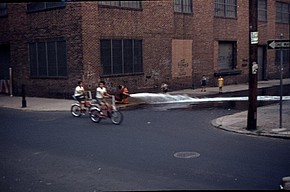 The neighborhood consisted of typical brownstone row houses 2 stories high-some vacant and some vacant lots, a corner store and a bar one block down towards Germantown Avenue where a streetcar was still running. The neighborhood had not suffered a lot in the riot the year before. If I look at it on Google maps, nowadays it has changed a lot: on some blocks, the row houses have been torn down and replaced with single or double houses on bigger lots with lawns, something that did not existent there before. However, the house where I lived, one block down the street from the church, is still there. The church has changed its name, which indicates that the neighborhood is now populated by people of Spanish speaking origin.

The community center had received a grant from the government in a program, which apparently was a reaction to the riots of 1967 and 1968. With this money, staff was recruited to provide classes and outings for kids of the neighborhood – to keep them off the streets and out of the gangs. In our neighborhood, the ruling gang was named Zulu Nation – you could read this on many walls. I did not see any open recruiting but I knew that some of the older brothers of my kids were members. There never was open gang warfare in our neighborhood, although during the first half of 1969, some twenty odd kids were killed in Philadelphia (the ‘City of Brotherly Love’) in gang wars, some stabbed, some shot with zip guns made out of car aerials. I myself did not fear any violence by the local gang; I could walk in our neighborhood late at night and would meet gang members who would just say hello. However, I would not even dare walk down a few blocks in broad daylight into the next gang’s turf. However, being friendly to me did not entail respecting my possessions Twice my room was pilfered, the first time the boys took my best clothes and records, but left my books. The second time they took my camera with lenses and accessories.

Although I was one of the few white people in the area, I did not experience any overt aggression there. I had soon made friends with the family next door – the mother was one of the pillars of the church – and often sat on the steps in the evenings with them. That’ s life happened in the summer; the kids had a big wrench to open the fire hydrants and take a shower then the police would came and chase them away and close the hydrants. As soon as they had left, the kids opened the hydrants again.

During the week I took our kids – about 8 – 10 - on trips to a public pool, parks and occasionally to a museum. One week, we went to a camp in the mountains, another time to Atlantic City – places where they could never have gone without our program. They were a pleasant lot, and never caused any problems with the exception of one night.  M. (one of the nicest kids) got so upset that he ran home and returned with a long knife. Fortunately, we were able to talk him out of using it against the boy who had insulted him.

As I said, I never encountered any racial adversity in our neighborhood .Even when some Black Panthers came by; they were told that I was not ‘white’ but ‘German’. Whether that made me something different, I don’t know. I was only assaulted one night in a downtown bar by a man who asked me: “Is you a hippy?” and who, as I later learned, would be shipped off to Vietnam soon. I guess that he resented me because he thought that I had evaded the draft. Fortunately, my black friends kept him at bay so nothing really happened.

In the summer of 1970, my time with ASF was up, but – as the community center had received another grant, they asked me to stay during the summer, which I did. Then in September, I took a trip to the West Coast driving through the Midwest, visiting the Badlands, Mt. Rushmore, Zion National Park, Bryce Canyon, Las Vegas, LA, then San Francisco, Yosemite, Salt Lake City and so on. Late in September, I returned to Germany and took up studying in Frankfurt. Looking back, I find that the time spent in the US and the work I had been doing was not only rewarding, but also enlarged my view on the world at a crucial time in my life.

Wolfgang Köberer, ASF volunteer in the USA from January 1969 through June 1970