The voluntary service with ARSP gave me wings 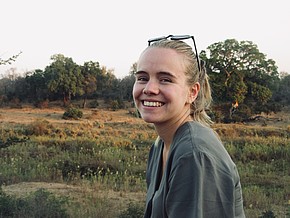 Before I started my voluntary service, I was very nervous… I had been to the US before, but living there for a year, far away from home was completely different. Furthermore, I was unsure about my project. I had never met a Holocaust survivor before and the Jewish people whom I had met could be counted on one hand. However, I was also looking forward to having new experiences in a foreign country and to get to know a new, different culture. Thus, I had very mixed feelings at the start of my voluntary service.

Now, two years later, I can laugh about my anxieties. Not only did the seminars of ARSP help to prepare me for my voluntary service, but also my project partner, Selfhelp Community Services, Inc. was great. My colleagues helped me with every problem I had; from questions about Judaism, dealing with posttraumatic stress disorder, my general tasks or simple things like opening a bank account. This welcoming beginning soon made me feel at home in the metropolis of New York. My job was to visit Holocaust survivors at home and to support them in their daily lives, by helping them with the computer, by singing with them or by simply keeping them company. The people, as well as my tasks, were so diverse that I never felt bored but rather challenged to learn new things every week. Furthermore, against my expectations, the survivors were very open towards me and I soon built very close relationships with them. I am still in touch with some of “my Oldies” and it makes me so happy to hear about their lives and to know that I have such impressive friends on the other side of the ocean. I hope that I can visit them soon, as I know that they are not getting younger and communicating with them might become more difficult in the future.

Thinking about it now, I would say that my voluntary service and all the experiences I made, have made me much for reflective as a person as the work with the survivors opened my eyes. I had been interested in history before, but their stories made me realize what hatred and ignorance can do to single persons but also society as a whole. Therefore, I decided to study European Studies in Maastricht. The program is very diverse, from history classes to politics, law, sociology or philosophy. After finishing the first year, I can say that I very much enjoy the classes as well as studying in an international environment. (Maastricht University claims to be the most international university in the Netherlands. This might be true, but I would say that around 50% of the students are German.) Studying is very different from my time in the USA and getting used to living in such a small town as Maastricht was not easy in the beginning but I was able to manage and am looking forward to starting the second year in September after three months of holidays. I am still not sure what I want to do later in life as a profession. The voluntary service and my studies both strengthened my interest in history and especially in commemorative culture and its impacts. Additionally, my voluntary service made me realize who I want to be as a person: I want to be courageous. Somebody who speaks up against hatred, injustice, and inequality and who fights for a more just world. I sometimes struggle in these tasks, but the strength and courage of the survivors has encouraged me and continues to motivate me every day to aim to be a better person. What I can say for myself is that the voluntary service with ARSP gave me wings. Even though I am still learning to fly, it provided me with many helping hands that pick me up if I fall.

One year after the end of my service, I want to thank everybody again who made my time in the USA and my voluntary work so valuable. Even though it was only a year, I made experiences for a lifetime and learned so many new things about myself, about Judaism, about the Holocaust and about caring for others. Thank you!