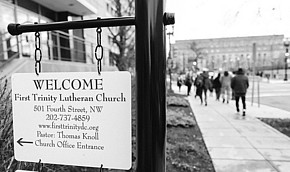 Together with Interreligious Task Force (IRTF) my project in Cleveland Ohio, I went to Washington D.C to attend the annual protest against Guantanamo Bay, organized by Witness Against Torture (WAT).

Witness Against Torture is a movement founded in 2005 when 25 Americans went to Guantánamo Bay and tried to visit the Muslim prisoners held without due process in the detention center; after they were denied access, the people realized that they had to continue their vigil for these detainees held outside the formal US judicial system.

Since then, every year in the second week of January (because the first prisoner arrived in Guantanamo on January 11 in 2002), WAT has organized a liquid fast in D.C. to be in solidarity with the prisoners.

In addition to the fast, WAT also organizes political actions in Washington, D.C. to educate people and raise awareness, and to put pressure on the federal government to close the prison.

We stayed in at First Trinity Lutheran Church together with activists from all over the country; around 25 people slept in a large room in the back of the church on mats.

We had a team that was in charge of getting liquid foods for the group.

Together, we organized demonstrations in front of the White House, in front of the Pentagon and the Supreme Court. We worked together with Amnesty International, went to court hearings, and visited senators and congressional representatives.

I have learned a lot about lobbying work for human rights groups. In addition, I learned that there is a lot of organizational work to plan a demonstration.