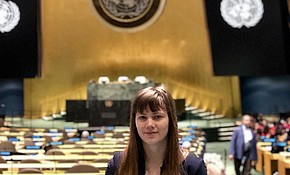 It was the first time for me to sit in the General Assembly Hall of the United Nations. The occasion was the Holocaust remembrance program on January 28th. But how did I get there from the small village in the south of Germany, where I am originally from?

I am 18 years old and last summer I finished high school. During that time, I applied for a voluntary service with ARSP, after I did a lot of research about my own family history. Part of the preparation was a visit in Auschwitz in spring. There, I realized that my service will be important. Important for remembering the past but also as a symbol for the future to live in peace, too.

Together with 22 other volunteers I arrived in the U.S in September. It was obviously a big change for me to live in a city abroad, far away from my family. In the beginning New York City was a little overwhelming. I am sharing an apartment in Hell’s Kitchen in Midtown west with another volunteer here. Even though it took a while to get used to the noise, the traffic and the time difference to Germany, it is exciting to explore the city and to feel the diversity.

We also got a lot of support from locals: Sarah Heim, a former volunteer in Germany, became the contact person for me and the five other NYC volunteers. We received an invitation from Sami Steigmann, a Holocaust survivor and Risa Liskov gave us a tour through the Museum of Jewish Heritage. We learned a lot about the immigration history in the Tenement Museum together with Miriam and Paul Gold, who also invited us for lunch in their family restaurant. These all were great opportunities to get some insides for living in NYC and I am very thankful for that.

The great thing about ARSP is that they have a lot of different projects for volunteers. Since I’m interested in politics, I am very grateful that I can work for the American Jewish Committee in New York City. Their mission is to combat anti-semitism, extremism and to safeguard human rights. I am serving for the young leadership department, which tries to get people between the ages of 25 and 35 engaged into politics. My main task is to help with organizing events and doing research about certain topics. The shooting in Pittsburgh, where 11 people were killed in a synagogue in the end of October, was harrowing and it showed us that even 80 years after the Kristallnacht, we still have to fight against hatred.

For keeping the memory of the Holocaust alive, the UN does a Holocaust memorial ceremony every year. AJC NY brought in many diplomats, elected officials, interfaith and intergroup partners not only to commemorate but also to bring its lessons into action. It was a moving ceremony for me, where not only officials like the United Nations Secretary-General António Guterres spoke but also two Holocaust survivors. Many of them, and veterans of the Second World War, attended the event. “What does all this mean for our times?” asked Sara J. Bloomfield, Director of the United States Holocaust Museum in her speech. I think it is a question everyone should think about, so that we are not only commemorating but also gaining the ability to create a better future.