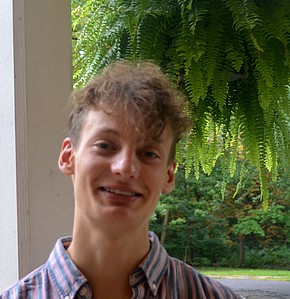 I’m very thankful that I can visit Holocaust Survivors during my work at the Holocaust Center of Pittsburgh. It is a very meaningful experience for me, especially because there won’t be any survivors left in a couple of years. The Survivor community in Pittsburgh is getting smaller, but is still active. The Holocaust Center coordinates a monthly meeting with the survivors, where the can chat, eat cookies and drink coffee. It’s always interesting because there are so many different personalities. From conservative voices to men like Herman, who considers himself as a communist. That can lead sometimes also to discussions or even fights among the survivors because of the different opinions in the room.

At the last Café Europa, I spoke in front of the survivors about my family history related to World War II and told them a little bit about how Würzburg (the next bigger city where I live) changed before, during and at the end of the war. I also told them about ARSP, how ARSP is trying to work towards reconciliation and against racism. I was a little bit scared at first, because I didn’t know how they would react. Especially because some of the more conservative survivors had a lively discussion because of the refugee crises. I did my best to express my opinion and explained to them my point of view and why I think it is important to protect those who are fleeing to Europe. I wasn’t sure how they would react to my opinion but at the end even the survivors who are on the conservative side were very pleased about my presentation and that I expressed my honest views and opinions. So it was a great experience for me and I’m happy that I was allowed to do the presentation and led the discussion of freely.

Once a week, I visit Shulamit . She is one of the youngest active survivors in the community. She’s really an open-hearted, cordial lady. Shulamit was born in Vilna, in Lithuania. She survived the Holocaust because she was hid by a Polish nun for three years in a cellar when she was one year old. She risked her life to give Shulamit shelter. The cellar had no day light and the nun only came a couple times a day to give the little child enough water and food so she could survive. After the war she was lucky to find her parents again, who also managed to survive World War II. Shulamit had to go to a rehabilitation center after the war, where she was physically and emotionally rehabilitated. She often tells her story to school groups when they visit the Holocaust Center for a field trip. I think her story is very moving because she also tells it without any anger or bitterness. Even though she was treated so badly as a child, she enjoys life. That is very impressive to me. She was also involved with the former volunteers from the very early beginning when ARSP started the project at the Holocaust Center in 1990. She is still in contact with one of the former volunteers and travelled even to Germany to visit him once. When we talk we don’t always discuss the past, we also talk about the future and current events: What Trump and his administration is up to again, what Jewish holiday is coming up what’s going on in Europe.. And usually we will have something to eat. Sometimes I bring doughnuts or she will order some food. It is really a pleasure to talk to her because she’s such an open-minded person that has a lot of stories to tell. She even started to call me her adopted grandson.